I had a thing, for a good portion of my years in school, all the way up through high school — likely influenced at least somewhat by my godfather, a highly sought after architect of, at that time, the richest homeowners in the country — about occasionally but obsessively designing my own imaginary house. Thinking back now, I’m not entirely sure where the desire to do so came from: I loved my childhood house. (And I do mean I loved it; I was fiercely devoted to it in a way I’ve never felt about any other place I’ve lived, observed and lived within it with deep affection and attachment for as long as I could remember, photographed it obsessively once I knew we’d be moving out after 17 years living there.) 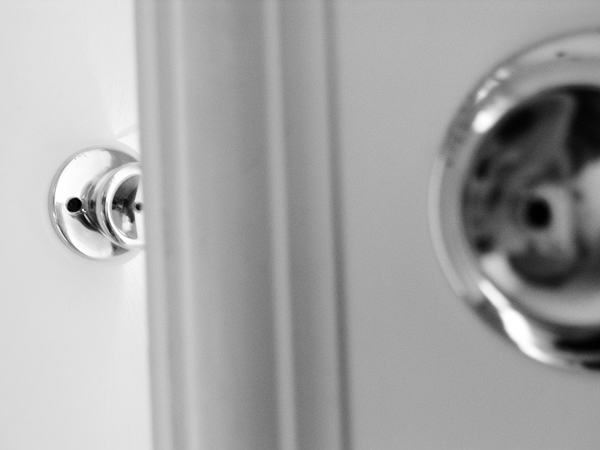 Doors (Carmel Valley, 19 April 2004). When I say I documented my childhood house obsessively, before we left (June 2004), I mean it sincerely. There was a light that lived in that house, which I did my best to capture — my father imparted to me the importance of the meaning of photography, which is “to paint with light” — but have never encountered anywhere else I’ve visited or lived. I’m always looking for it, but I have never found it again. I don’t imagine I ever will. The only place it still lives is in a few achingly earnest photographs I took when I was 17 and mourning.

Maybe it was just one more way of exercising my visual thinking acuity, or just another doodling outlet or outlet for my little Lego-loving ass… Maybe it was just a little girl who’d never known what it was like to have money trying to imagine a world where you get to create your own living space, the way they entice you to do in home style magazines and those early demo computers in hardware stores: the way rich people do. It definitely is to blame for my long-lasting and bizarrely fierce dedication to the use of graphing paper. To this day, any time I move, I still create a scale model of the room I’ll be moving into, complete with loose pieces representing every piece of furniture, and plot it all out before I actually lift any boxes or hammer any nails in.

This past weekend, the landlord has been (finally) doing some sorely needed renovations on the main bathroom in our apartment, which meant all three of us needed to find somewhere else to shower for a few days, while the paint and new caulking dried. Thanks to a very fortunate bit of timing, another tenant in the building, who’d lived in one of the upstairs units, to the east side of the building, just moved out at the end of January; we were able to wheedle the landlord’s permission to leave the back door to the place open for a few days, so we could make use of the shower up there, in the now vacant unit. I’ve lived in this building for over four years now, but I’d never once ventured upstairs, or even into another one of the six or seven other units, until now. (The fact that I’m honestly not sure — still! — whether there are six or seven besides ours probably makes that fairly embarrassingly clear.)

Walking into that apartment for the first time the other day, I was a bit floored, and suddenly wished, in a way I hadn’t done in many long years, that I could afford to live on my own. It reminded me of a game I once played with a childhood friend, where we’d run across the street from our neighborhood to the freshly built houses across the street — as San Diego expanded wildly in all directions and overbuilt itself into a sprawling suburban, traffic-ridden hell arguably worse than the bits of LA everyone bitches about the most — let ourselves into one of the three furnished model units the realtors always seemed to leave unlocked, and play dream house in them. But this, now, was somehow even better: this apartment here is, for the time being, blissfully empty. It’s a truly blank canvas.

It’s smaller overall, with fewer rooms — meant for one tenant (at most two), whereas we’re able to fit three into ours fairly well — and the bathroom itself, our point for having access to it now, is certainly smaller than ours. (No dedicated parking space either, so far as I know.) But… hardwood floors! Be still my heart. An A/C unit in the living room! Fewer rooms means they’re all at least somewhat larger, too, particularly the kitchen. Though the first thing I swooned at, even before the flooring, was the large picture windows facing out onto the main street. Sure, the bedroom is the closest to the street, but I sleep like the dead, so what do I care about road noise? Those windows are heavenly. There’s a ceiling fan in the bathroom, and their window isn’t painted shut! The air flow is divine. Then, of course, I turn to my right, and discover the walk-in closet, with its own window, and die a little inside. And, of course, fall a bit hopelessly in love with the whole thing.

It’s arguably a sillier fantasy now than it was when I was a little girl; pretending this great empty space is something I can furnish and arrange to my liking. At the rate I’m going, I’ll die never having had the luxury of living alone, let alone owning (or even renting) any property just for myself. Even considering it seems absurd. Still, for the first time since childhood, I know at least one little corner of my mind will be laying graphing paper gridding over those rooms in my mind, imagining what I could make of that fresh, open space, in that fantasy world that will never be, where it’s mine to do with whatever I want. Is it better or worse to be dreaming a little about a space that’s not only not entirely made up, for once, but that’s just a short trip up the stairs from where you already are? I’m honestly not sure.